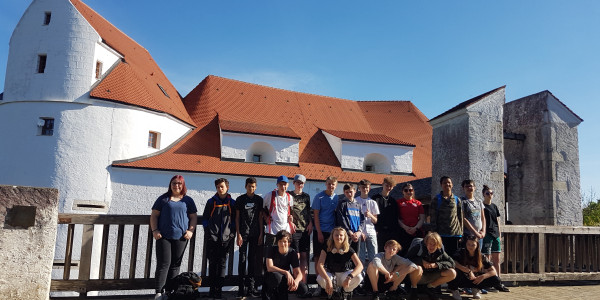 In the morning at about 8:40 we all met at the train station . After we had finished organizing ourselves, our train came and our journey began. The first train was very full, but on the “Hohenzollernbahn“ we had a lot of space and it was much quieter. We arrived at Beuron and our luggage was picked up by a truck right after we met a nice guy called Mr. Hafner. He hiked up the mountain to castle Wildenstein with us and told us many interesting things about the forest and the lynx. At the castle we could rest for a while until we went over to the bow and arrow area. There we were taught how to use it and how to aim correctly. It was really fun! After that we were quite tired so the dinner time was a relief for all of us. In the evening we talked a little bit and then went to sleep. 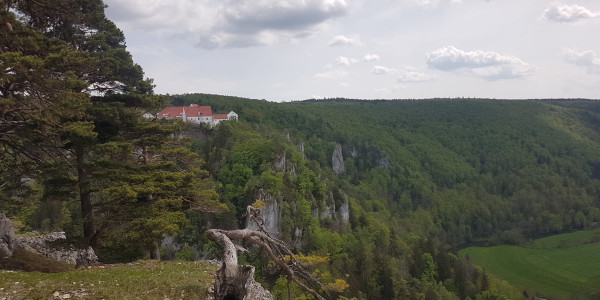 The next morning we had to get up really early to get breakfast. The breakfast was really nice and we were also allowed to make ourselves sandwiches. We were picked by a bus to drive to Campus Galli. A nice woman gave us a tour through Campus Galli and told us something about the history of the place and how they built it. After the tour we got something warm to eat at the “marketplace“ and looked at a couple of spots ourselves. The bus drove us back to the castle, where we went on a nice little walk right after we had a little break. In the end the “little walk“ turned out to be a much harder adventure than we thought. All people except me and six other kids and Mrs. Rode went on. We kept on walking and had a great time and also found a great spot at the cliffs with a great view. In the evening a couple of us went outside on a nightwalk to try out Mr. Ramsperger´s night vision camera.

The last morning we got breakfast, cleaned up our rooms and walked a nice path down the hill and through the valley. At the train station in Beuron we got our luggage back and waited for our train to Sigmaringen. The trainride to Sigmaringen was okay and the city centre was really cool, but the climbing park was not exactly what we imagined. In the end, it still was quite fun, though. After our train ride back to Tübingen our journey ended and we split up.

Picture: The view towards castle Wildenstein and down into the Danube valley from Bandfelsen